Programme available to download and print here and here

Or save your ink and pick up a copy in various outlets around the Black Isle.

Abbot & Dooner Elder statesmen of the Inverness music scene and half of the legendary country trash band, Stetsonhead. Robin & Ali perform an acoustic set drawn from another of Ali's side projects, “The High Lonesome” - the clue is in the name, songs of lost love and hard drinking are sure to feature in what will be an unmissable performance.

Tom Cruikshank and Willie Doig Popular Inverness guitar and accordion “Jock Rock” duo featuring Cigar Box Don. Expect anything from the Dark Island to Irish punk and everything in between!

Angry Old Man Tour 2019 A welcome return to the stage of a local bloke who thinks he’s funny.  A fun-packed set of ranting, humour and humorous ranting.

“Boiled my piss”  The Guardian

Last year we described this as ‘Price-less’. Regrettably this is not true. (When will he get the hint?)

Local favourite Phil Graham performs cover versions in his own inimitable style, possibly mixed in with some salty tales from his sea-faring ventures. A great entertainer. This is a change from the published programme due to unforeseen circumstances.

Robin Abbot Robin has been a mainstay of the Inverness music scene for over 20 years – The Lush Rollers, Stetsonhead & The Mystic Shoes et al – and an inspiration to young local artists. Here he plays an intimate solo set from his debut EP ‘If Not Now...’

Ben & Ashley Ashley Mackay (vocals) and Ben Hesling (acoustic guitar) are the founding members of Inverness based act Ashley and the Cosmonauts.  Having entertained audiences all round the Highlands and beyond, from the main stages of festivals like Belladrum to hotel function rooms for events such as the Avon Lady's annual work night out (and pretty much everything in-between) Ashley and Ben deliver a set of soulful original songs peppered with some choice cover versions, from classic hits to modern pop.

On The Black Flamenco guitar, gypsy fiddle and ethnic percussion take you on a journey where French chansons meet Scottish trad and jazz. Based on the Black Isle of Scotland, from where they take their name, this Franco-Scottish collective have a knack for captivating audiences with their unique blend of world music.

Abigail Millar Todd Currently resident in Cromarty Abigail is a 19-year-old, classically trained harpist from Avoch. She has returned to the Black Isle after studying in Oslo at the Norwegian Academy of Music. She will play a variety of music from the baroque era through the classical and romantic periods to the modern day.

The Disclaimers Often considered the Black Isle’s answer to Spinal Tap, but without their clarity of musical direction. Despite several decades playing together their playlist revolves around a handful of songs that listeners from the early '70s (or in their early 70s) will be familiar with. Using fewer chords than Status Quo they deploy them both with commitment, often (but not always) at the same time as vocals. With live performances rarer than Blue Nile gigs this is an opportunity that music aficionados will treasure.

Phil & Piggery Spur Mike and Greg are once again joined by the fabulous Phil Graham - they’ll be playing a set of new songs inspired by life in the Highlands. Expect guitars, bouzouki, fiddle and three-part harmonies.

Finish off the afternoon in a relaxed style; some of the musicians will be in the pub having a good old-fashioned jam. Join in if you wish and you’ll definitely be made to feel welcome. 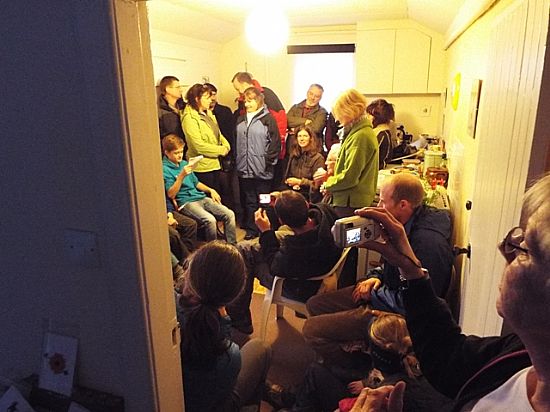